It is hard to find a car owner who never had to deal with unexpected and unpredictable damages caused to their cars, like ugly scratches and dents. These are inevitable evils that are nearly impossible to avoid. What disgusts the car owners the most in this, is their unnecessary wastage of time and money in order to bring back the original look of their car at an auto repair center. It is for sure that no car owner will be prepared for this. But to make them feel comfortable the latest technology and methodology come handy, assured the center head who runs the unit of Spokane Valley paintless dent removal. 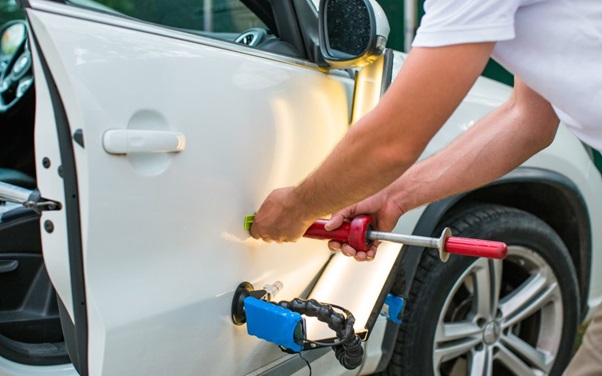 He said, it is to address such sudden damages that are ugly but not so serious, that the concept of paintless dent repair has emerged. It is a procedure that is self-explanatory. It removes the dents from the surface of a car, without having to paint it. But can all the types of dents be removed through a PDR? Let us learn about it.

It is Good for Small Dents

As per the expert opinion a PDR or a Paintless Dent Repair works best when you apply it for small size dents, as small as a donut. Since the paintless dent repair system involves pulling out the dent and no paint job, it can be effective only when the dent is not too big, deep and serious. Usually dents that fell on the car surface due to hailstorms or stone peddling can be addressed by the paintless dent repair without a hitch.

When Is It Good for Your Car?

If your car body surface has suffered multiple dents, caused by the hailstorm or because of some heavy objects falling on it, and it happened all of a sudden, the best way to bring back the normal beauty of your car is going for a paintless dent repair. Not only it will be done in the least possible time, tis procedure will also ask you a very lesser sum of money in the bill. This will be so because the labor charge and material cost will come down to the bare minimum, since there is no paint job involved.

When you are least prepared to spend an extra shot of money on your car, just because of some accidental reasons, it has faced some ugly patches of dents, you can choose the paintless dent repair job to ease out your burden and relax for the day. Your car will come in perfect shape, once the PDR process is implemented on it.

When it Does Not Work

A Paintless Dent Repair, will not come to your rescue in some specific conditions. It will not work when your car surface has got some scratches, got a bigger sized dent that has also damaged the paint of that area. In all these cases, your car needs to undergo patch painting, if you do not want to repaint it all over again, suggested the in-charge of the Spokane Valley PDR unit.